Note: At the time of publication the online functionality is not yet live for this game. As it is such a crucial part of the experience, we have decided not to score the game until we can have sampled the full online experience. Once we have, we will update the review accordingly and add a score.

When Wii Sports came out in 2006 it was nothing short of a revelation; beforehand video games had been all but relegated to buttons, knobs, and sticks as a means of controlling them, but the Nintendo Wii and its titular pack-in sports title bust that idea wide open. You all know the story — waggle waggle, tennis racquet moves, mum’s besotted, dodgy elbow next morning — but now Nintendo’s trying to have another pop at the formula (after Wii Sports Resort and we suppose Wii Sports Club) with Nintendo Switch Sports. It’s been 16 years, but are we looking at 16 years’ worth of improvement?

Let’s cut to the chase: there’s no secret seventh game (although golf is coming soon), there’s the six games that are available at the start, and when it comes to local play that’s your lot. Whereas Wii Sports had the training modes that showed you how to play each sport through a variety of mini challenges, Nintendo Switch Sports just has a brief (and skippable) interactive tutorial that plays when you select a sport, but only for Chambara, Football, and Volleyball. If you’re in the dark on how to land a specific shot in Tennis, you’re out of luck.

Considering Wii Sports had the previously mentioned training modes for each sport, this is quite disappointing. It can’t be denied that the sports are simple to pick up and play, but this hinges on your being familiar with the sport it represents from the off. You’ll also not find a great deal of variety in how you can choose to play each sport. Some do have options and different ways to play which we’ll detail later on, but many only have a simple selection of three difficulties when playing against a CPU.

But let’s talk about the sports themselves — you know, the whole ‘game’ part of the game. Volleyball is a fairly slow affair, unfortunately. The ball moves at a glacial pace to allow players to time their shots more easily which is laudable in its intent, but ends up making the entire game a slog. No options to change how the game plays either, it’s the first team to five points and that’s your lot.

Badminton is the opposite, a quick-paced one-on-one bout where your accuracy and timing are critical. We had far more fun with this than we were expecting to; even though the concept and execution is simple, its pace and fluidity helped keep us interested. Unfortunately, like Volleyball there’s no options to adjust how the game plays, and no doubles mode either. 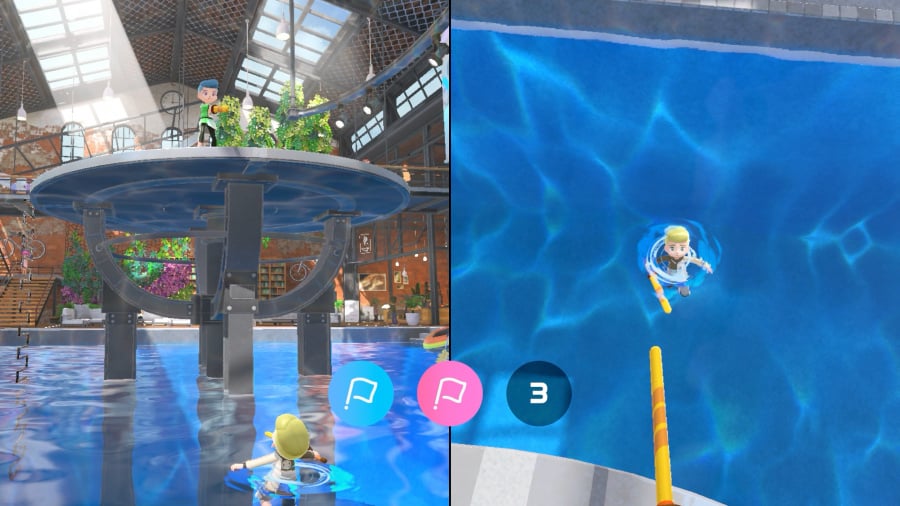 Bowling is (as it always has been in Nintendo’s sport games) an absolute delight. There’s something so satisfying about seeing the ball roll down the lane and clatter into the pins with that extra bit of spin that you put on the ball by twisting your wrist. Better still, the ‘Special’ mode throws a host of obstacles down your lane semi-randomly, forcing you to completely rethink how you’re going to get that ball of yours into those cheeky little pins at the back.

Soccer is the most involved sport by far. You have to run around using the left stick (gasp!) and use a variety of angled kicks in order to get that ball into the opponent’s goal. It’s a massively simplified and slowed-down affair compared to the real thing when it comes to movement, but it’s a decently good time only improved by the various options for play. You can do a 1v1, a standard 4v4, practice your little football socks off, or boot directly into the goal in the Penalty Shootout mode. It does feel a little unengaging at times — provided you’re not just chasing after the ball constantly like a five-year-old — but it’s still a decent laugh.

Chambara is an odd one, but by no means do we mean that in a bad sense. The premise is simple: attack your opponent to knock them back whilst avoiding their block attempts, and block their attacks to stop yourself being pushed off the edge. It’s the nuance that makes this all so interesting, though. You have three different weapons to choose from all with their own strengths and weaknesses, but the real fun is in gooding and throwing off your opponent mentally. Essentially it’s poker without the risk of having your real-life legs broken. 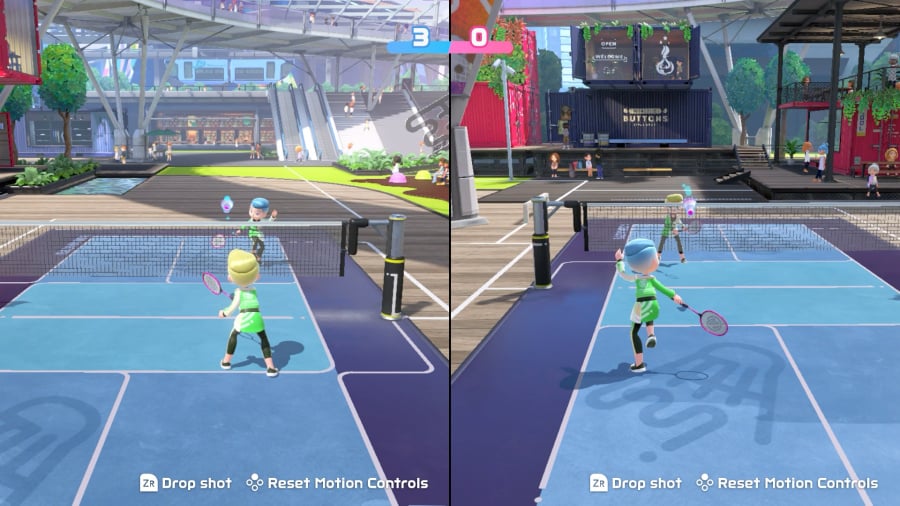 And lastly we have Tennis. We don’t really know what to think of Tennis; the concept is fine in theory but the execution feels a bit lifeless. It’s similar to the Swing Mode in Mario Tennis Aces, except stripped back by several degrees. Nintendo claims that you can use a variety of shots when playing, but despite all our efforts we’ve only been able to perform forehand hits, backhand hits, and occasionally a lob when we were really trying. You’re also forced to play doubles in complete contrast to Badminton, which is fine in theory — after all, that’s how Wii Sports did it — but when you’re controlling the net player as well as the back player it all feels a little forced. Throw in the lack of any major options besides the number of games (with no way to even play a full set) and what you’re left with is something that just feels a bit limp to us.

But whether a sport is good or not, it’s always heightened by adding additional players. Multiplayer is unsurprisingly the main draw of Nintendo Switch Sports, and even the lacklustre sports were notably more fun with other humans as opposed to playing solo. Yet having said that, even when playing with other people there’s a distinct sense of ‘is this it?’ permeating the entire experience. If you want to play one of the six sports, you’re golden. If you want anything to spice it up, you’re more than likely going to be left wanting. We know we were.

Customization is also a mixed affair. You can customize your avatar with a handful of different hairstyles, clothing colors and… well if you’re playing locally that’s about it. You see, the lion’s share of customization items and equipment are exclusively unlocked in the online mode, meaning anyone who doesn’t have an internet connection or just wants to play with their friends or family locally is stuck with the fairly meagre default lineup. Miis have been sidelined we’re sure in part to allow more customization (although you can still play as your Mii if you wish), but when that customization is locked behind an internet connection we can’t help but have a bit of a sour taste left in our mouths. 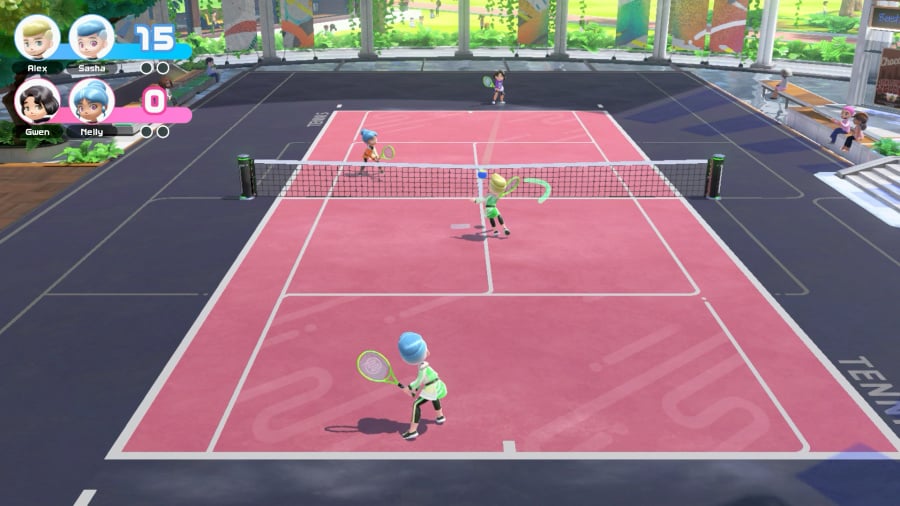 As far as looks go, it’s a generally decent effort. Spocco Square is a good-looking setting with lots of environmental details here and there, but it does feel somewhat generic at the same time. Performance is also largely good, holding a solid 60fps in almost all instances save a few peculiar instance of slowdown when bowling with more than one player simultaneously.

We’re hoping that as soon as the online functionality is live Nintendo Switch Sports will make a lot more sense, but as a purely local game there’s a lot to be desired to make this a worthwhile purchase. If you’re keen on simply playing some motion-controlled Wii Sports-like games on your Switch then Nintendo Switch Sports might bring you a good bit of enjoyment, but if you’re looking for something a little deeper and with a bit more variety than the game you first played on Wii, you’ll probably be left somewhat disappointed.